Our #NoDAPL movement is celebrating the fact that a federal judge ordered the US Army Corp of Engineers to re-do its environmental review of the Dakota Access Pipeline. But the judge didn’t shut down the pipeline (yet) and we still need to take action to stop DAPL, and all pipelines proposed in North America.

More than 150,000 people, representing more than $4.3 billion dollars in assets, have signed on to demand an end to the dig, dump, burn capitalism embodied by these pipelines.1 And now,indigenous leaders are asking for your help to deliver the message to “every bank, every branch” this summer.2 Will you sign up here to host a #DeFundPipelines delivery event in Columbia? 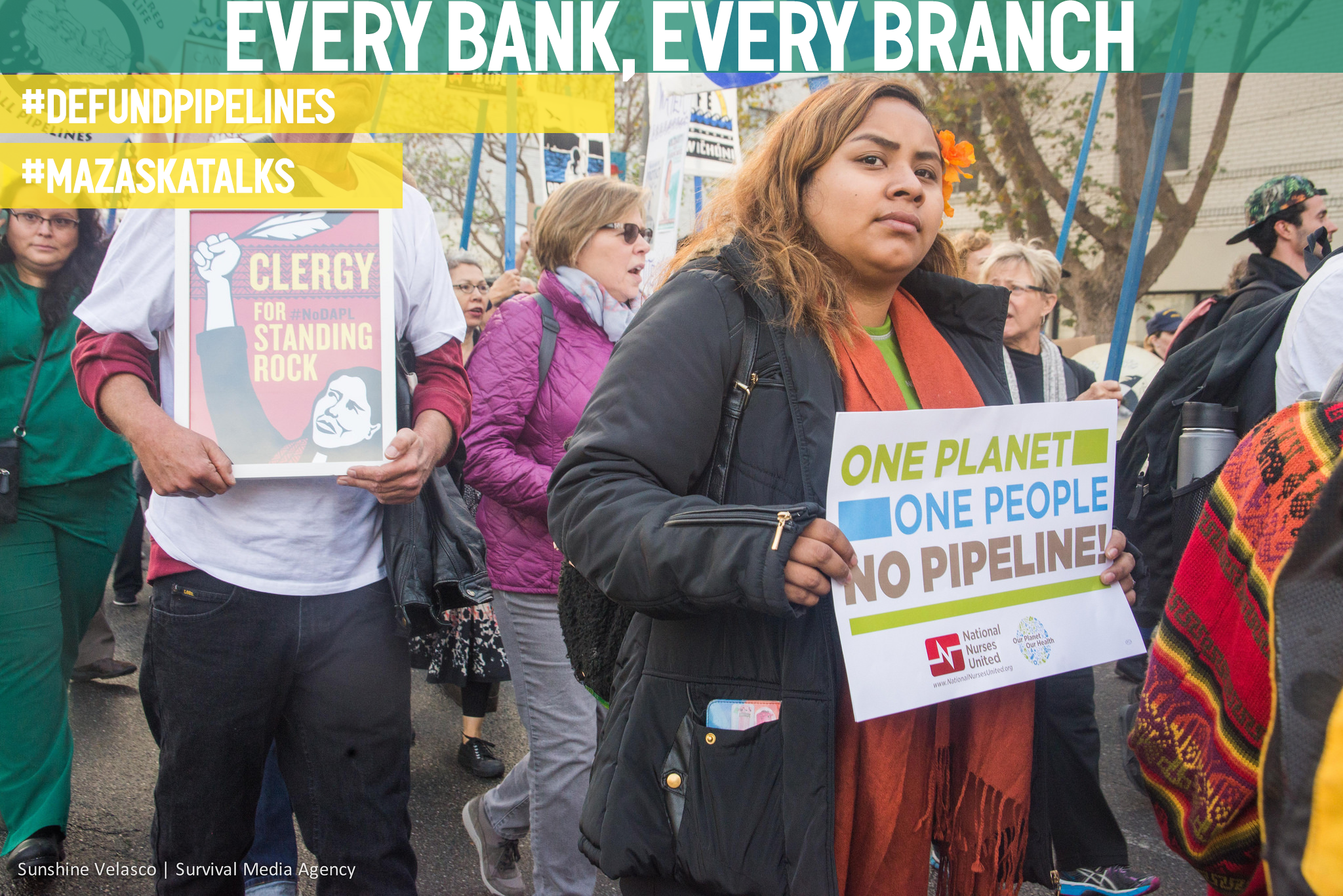 It’s been months since President Trump’s reckless executive orders to ram through DAPL and other pipelines. Since then we’ve learned that the company behind DAPL, Energy Transfer Partners used money from bankers and pension funds to hire military contractor TigerSwan to spy on encampments and coordinate brutal responses that included pepper spray, rubber bullets and blasting water protectors with water cannons in freezing weather.3

By the time oil finally began flowing through the pipeline, the same day that Trump Pulled the US out of the Paris Climate Agreement,4 DAPL had already leaked.5 That’s the same fate that awaits hundreds of communities and tribes if the build out of DAPL and 4 new proposed tar sands pipelines is allowed to proceed.

But without loans, bond sales, and other forms of financial support, pipelines like DAPL, Keystone XL, Trans Mountain, Line 3, Energy East and other oil infrastructure won’t be built. In fact, just this week Dutch Bank ING announced plans to scale back and revisit financing of Tar Sands pipelines.6A lot of US banks also decided to sit out a round of financing for the Trans-Mountain pipeline.7

Our pressure is clearly having an impact on these banks, but to stop these pipelines for good, we all need to do our part to help protect water, Indigenous rights and our climate. You can help by showing up in person to deliver the message to these banks that it’s time to stop financing human rights abuses and environmental destruction.

Sign up here to host a #DeFundPipelines delivery even in Columbia – we’ll support you with a detailed how-to manual, sample materials, signs and a community support fund to help you pay for logistics.

Drew and the 198 methods crew

PS – Don’t stop now – you can also organize to get your city, tribe or local government to divest. Check in with our allies at Mazaskatalks.org to get connected and learn how.