We’re living in the middle of a revolution against fossil fuel projects in America. The movement to stop the Dakota Access Pipeline has taken the nation by storm as the images of Native American protectors facing down bulldozers, snarling dogs and armed police in an effort to stop a major fracked-oil pipeline have inspired millions around the world.1

Now, the protectors camped in the path of the Dakota Access pipeline have asked all of us — no matter where we live — to take action in solidarity with them and say #NoDAPL. Will you answer the call? 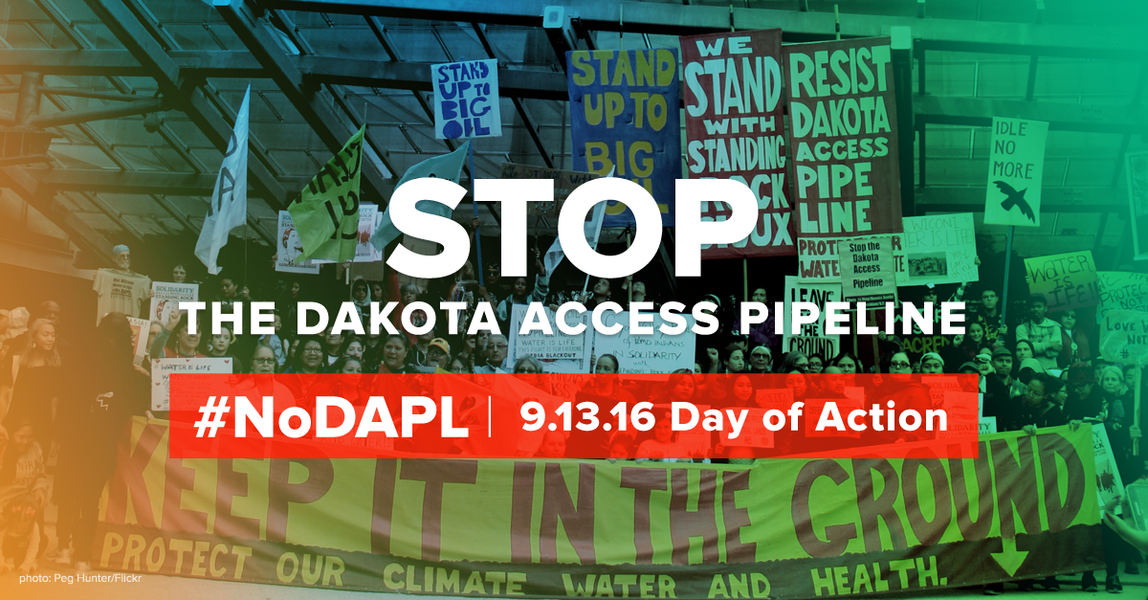 If built, the Dakota Access pipeline (DAPL) would carry toxic fracked oil from North Dakota across four states and under the Missouri River, immediately upstream from the Standing Rock Sioux Nation.1 That makes it a threat to the sacred land and water of Native communities and a disaster for the climate.

Thousands of Indigenous activists have set up prayer camps along the pipeline route in a historic moment of nonviolent resistance.2 They’re fighting with everything they have to protect their water, the land, their history, and the climate — and we need to fight with them.

On Friday, September 9 these protectors were dealt one win and one setback. First, a federal judge refused to stop construction on the Dakota Access pipeline.3 But then, just moments later, the Departments of Justice, Interior, and the Army Corps of Engineers issued a statement effectively ‘pausing’ the pipeline.4

Now, it’s up to all of us to make sure the decision of President Obama’s team to briefly stall the pipeline turns into a #NoDAPL ruling — and that the victory is expanded so that tribal rights are upheld and all new pipelines and fossil fuel projects are called into immediate question. Will you help?

To understand why the Obama team’s statement isn’t a total victory or a permanent stop to the pipeline, you have to read the fine print.5 The statement reads, in part:

“The Army will not authorize constructing the Dakota Access pipeline on Corps land bordering or under Lake Oahe until it can determine whether it will need to reconsider any of its previous decisions regarding the Lake Oahe site under the National Environmental Policy Act (NEPA) or other federal laws.”

This is good news. But it’s only a holding action. Obama’s team has promised to think more and harder about Dakota Access — but made no assurances about a final decision.

We’ve seen this kind of action before. Obama, then-Secretary of State Hillary Clinton, and later Secretary John Kerry repeatedly delayed the Keystone XL pipeline and called for more study.6 But in the end, it wasn’t until President Obama felt that public opinion had united against the pipeline, and when there was no longer a looming election, that he finally rules against KXL for good.

This time, we need to make sure that Obama, Clinton, and all elected leaders know that the nation is united in opposition to the Dakota Access Pipeline and ALL pipelines and fossil fuel infrastructure projects. We need a climate test to evaluate and rejected these projects anytime they would imperil our human rights to clean water, clean air and a safe climate for all. Obama’s hinted that he’s willing to consider such a climate test for all new infrastructure projects – but so far he’s stopped short of issuing the orders and enforcement necessary to make it a reality.7

We have the power to change that. By standing up and speaking out now – during the administration’s voluntary pause on the pipeline.

Click here to host or join a solidarity event on Tuesday, September 13.

There are lots of other ways to help too:

thanks,
Drew and the 198+ ways to stop a pipeline crew