You’ve signed on and spoken out, now it’s time to show up:

Donald Trump has signed executive memos intended to expedite the construction of the Dakota Access and Keystone XL pipelines.1 But there’s something he doesn’t know or expect:

A growing movement of over half a million consumers around the world, representing over $2.3 billion dollars, are calling on the 17 banks funding the Dakota Access Pipeline to cancel or re-negotiate their loans.2 If they do, DAPL will be broke and construction will have to be delayed or canceled.

But we need your help next week to starve the black snake by cutting off its funding. Can you RSVP to host or attend a #DeFundDAPL rally next week at a bank branch near you? We’re ready to support you with sample materials, action plans, fliers, and more. 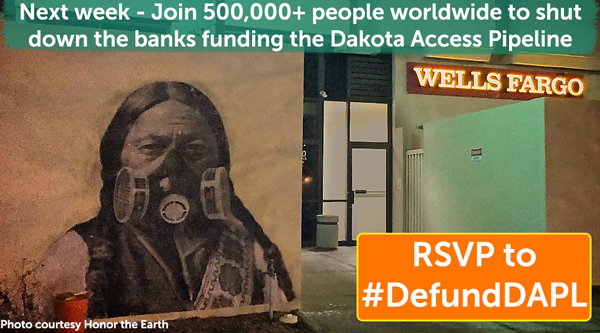 Let’s be perfectly clear: Trump’s executive memos will not get DAPL or KXL built. The corporate owners — Energy Transfer Partners, Sunoco Logistics, Transcanada et al — still need permits, approval from the Army Corps of Engineers, and most importantly MONEY to build the pipelines.3

What Trump is doing is a desperate attempt to show confidence in the projects and industries we’e been relentlessly resisting for years. Obama didn’t pull the plug on Keystone until determined, consistent opposition convinced him.4 Trump’s team is not likely to be convinced in the same way, but the big banks funding these projects can be moved.

Thousands of people have closed their personal checking accounts already, costing these banks over $50 million in the process. The signatures you’ll help deliver next week represent another $2.3 billion (with a B) in assets waiting to #Divest.5

That’s a consumer and investor movement that the banks will find hard to ignore because, put simply, we’re worth more than any one oil pipeline.

Now, we just need to convince the banks that we mean business. And to do that, we need you to show up at a local branch with some friends. Your event can be large or small – 2-3 people are enough to deliver a letter and close your account with one of the 17 banks. And a small crew of 6-12 people can stage a really powerful teach-in (as our allies at Honor the Earth have been showing again and again the last few weeks).6 But the more people you have, the better. Events are already being planned in cities around the world – from Tokyo to Munich, San Francisco to New York City – so get started now. Sign up to host or attend a local #DefundDAPL protest in solidarity with the Standing Rock water protectors next week.

See you in the streets,
Drew and the 198 methods to stop a pipeline crew

P.S. — Rex Tillerson is all-but-certain to be confirmed as Secretary of State next week. What’s not certain is whether a handful of cowardly Democrats will vote for a climate-denying oil baron to represent the U.S. abroad, in the name of civility and negotiating with a fascist regime. No matter where you live or who your senators are, please call them – or call them again – and ask them to oppose ALL of Trump’s dangerous, climate-denying nominees.