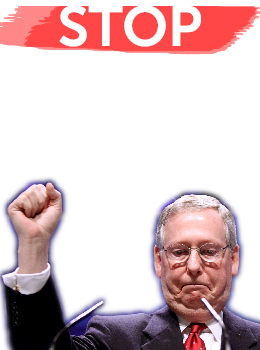 Earlier this week, Senate Majority Leader Mitch McConnell announced a nearly unprecedented plan to bring his pet Dirty Energy Bill to the floor without any committee hearings or review.1 Then, he announced plans to delay Congress’ usual August recess by two weeks.2

Both of those decisions indicate that Republicans want to use the next four weeks to ram through a whole bunch of really dangerous legislation. And for McConnell, a long-time vassal to King Coal, there is no policy more important than expanding the use of fossil fuels.3 Sign here to tell your Senator to vote NO on McConnell’s #DirtyEnergyBill!

Here’ the basic outline of the bill:4

Pure and simple this is an attempt by Mitch McConnell & Donald Trump to lock us into our addiction to fossil fuels for decades to come. At a time of growing revolt against pipelines, fossil fuels, and calls for divestment this bill is a gift to the fossil fuel industry. And, as a startling new piece in New York Magazine makes clear this week, we simply cannot afford any of this.6

But in McConnell’s haste to pass something he decided to skip the special budget reconciliation process, meaning he’ll need at least 60 votes to pass this bill. That means we can stop Mitch’s #DirtyEnergyBill with just Democratic votes and a few Republican supporters.

It won’t be easy – but this IS a fight we can win. To do so we all need toimmediately show Trump, Mitch McConnell, and the whole Senate that we’re paying attention.

Click here to tell your senators: VOTE NO on Mitch’s Dirty Energy bill!